75% of the jobs we do involve removing and replacing existing riprap (or botched boat ramps). These are gut jobs, in that we need to remove all the old work and then build the shoreline that will hold up over time.

Most of our customers have been left heartbroken by a landscaper or other non-specialist. They thought they were getting a great deal and would save a pile of money.  Until their poorly installed riprap crumbles like an old donut.

What about the other 25%? Usually it’s people in their 50s and 60s who have dealt with enough contractors and “bought cheap” one too many times, and have come to recognize that quality pays for itself.

A landscaper will say (to himself), “Hey, all we have to do is slap down some fabric, throw down some rock, and make several thousand dollars! Miller time.” By the way, this is also the case with contractors and other people who may be great at their trade but aren’t specialists in shorelines. We refer to them collectively as “landscapers” for the sake of simplicity and because landscapers botch the most shorelines. If it’s not a company that ONLY restores shorelines, you’re just kicking the can down the road. A generalist doesn’t know the components of a shoreline that survives in its uniquely tough environment. He assumes it’s simple and easy, which is why he gives you a nice low quote.

Because they are only quoted a few thousand dollars, many first-timers will take a pass on our craftsmanship and engineering (“Those guys sound expensive”) and hire the landscaper (“What a bargain!”).  We know that because we often get calls from those same customers within a few seasons. Many of our happiest customers are the ones who didn’t originally pick us.

Be careful with native shorelines, too. Some landscapers push them because they’re less work and quick to bang out.

Yes, we also do native shorelines. They have their place in the world, especially when they’re done right. But we’ve been called out to tear down many a “native” shoreline in favor of installing riprap instead.  If you’re interested in a native shoreline (whether for the overall health of your lake or purely for aesthetics) we almost always suggest a hybrid model (i.e., a combination of riprap along the water’s edge, plus a mix of native grasses and wildflowers along the landward edge.  This strip of native growth landward of the riprap is often referred to as a native buffer.  These native buffers are growing in popularity, and even becoming mandatory on many lakes throughout the Midwest.

Now, most landscapers mean well, and honestly try to do a good job. They just don’t know any better, because they don’t focus on shorelines by building them every day for decades, as we have. They haven’t studied the DNR requirements. They don’t understand the engineering. They haven’t forked over for the finest shoreline tools. They haven’t made any innovations that nudge the state of the art forward a little. They don’t understand what really needs to be done to protect that shoreline against erosion or shifting ice. They may even think the only goal is to make the shoreline look pretty, when in fact that’s secondary to preventing erosion so that you have a shoreline (and a house).

We used to be like those landscapers, about 18 years ago, but then the light came on and we started following DNR recommendations and requirements on every single job.  Over time, we even improved on the recommendations.

If you need to get your shoreline right with one whack at the pinata, you need a shoreline specialist. Look at what in-depth content they have on their site, look for pictures of their work, and look for reviews that tell you the “typical” customer is over-the-moon happy.

Otherwise you’ll probably end calling us anyway, perhaps sooner than you think, dying to pay us so you can forget the “affordable” landscaper’s work and finally do it the way you always wanted it done. 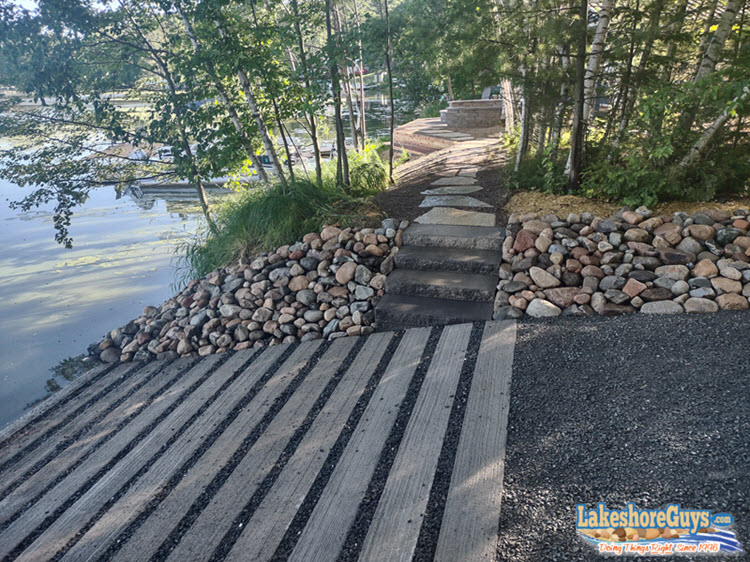